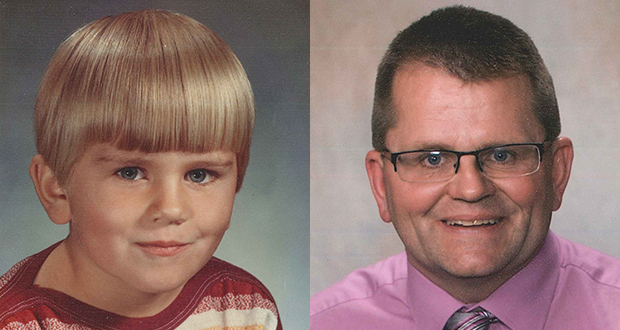 The Story of Dan Wold

Posted by Kelli In Uncategorized With No Comments

For God so loved the world that He gave His one and only Son that whoever believes in Him shall not perish, but have eternal life.

Daniel August Wold, son of Omar and Jean (Mogen) was born August 30th, 1966 in Watford City, North Dakota. He was baptized and confirmed at First Lutheran Church and graduated from Watford City High School. Throughout school, Dan was active in sports and vocal music. Highlights he cherished included playing in the North Dakota Shrine Football Game and receiving an Honor Choice Award. In 1990, he graduated from Dickinson State University with a B.S. Ed in Social Sciences with an English minor. He then moved to Ellendale, North Dakota where he began his teaching and coaching career.

In 1991, Dan married Cheryl Helmer in Zion Lutheran Church of Andover, South Dakota. In addition to fostering several children, they welcomed daughter Julia in 1993 and son Jordan in 1996. That same year, Dan graduated from Northern State University with a M.S. Ed in School Counseling. In 1998, the family moved to Carrington, North Dakota where Dan worked as a high school counselor and continued to coach. In 2013, they moved to Aberdeen where Dan worked at Aberdeen Central High School, Northeastern Mental Health Center, and finally as the counselor at Roncalli High School.

Dan was a sports enthusiast and enjoyed running, golfing, swimming and biking. In 2011, he trained for and accomplished the Fargo Half Marathon. He was also a talented writer, known for quick wit and humor, and spent several years writing a column for a local newspaper. Most of all, Dan loved spending time with his family and especially enjoyed traveling to Disney World and Disneyland with them. He was very proud of his children for following their dreams. Dan once said, “There have been a few things in my life that have proven to be even better than expected. I am talking about my wife and my children and our life together.”

In January of 2016, Dan was diagnosed with a rare, aggressive cancer, laryngeal chondrosarcoma. What made this type of cancer particularly challenging was that Dan’s voice box was removed and he had to learn to communicate in a whole new way through the use of digital device, the electrolarynx. He leaned on his faith and was an eternal optimist through each new challenge he faced. Dan continued to teach, coach and exercise daily throughout his treatment and persevered with strength and grace.

Dan joined our Heavenly Father on August 16th, 2018 with his family by his side. He was an inspiration to many during nearly 52 years and is remembered fondly. It was said at his funeral service, “That was Dan. He could shine the light of love and care in such a way that it would reveal what is most important.”